Fundraisers know the wrong ask amount can sabotage even the most compelling and well-executed appeal. Asking too little of donors with a higher capacity to give can leave money on the table for your cause. While asking too much of some donors can turn them away from giving all together.

Dataro’s new Ask Amount propensity takes the guesswork out of asking to help fundraisers deliver the best fundraising outcome for each donor solicitation.

This article provides a summary of how the new feature works, how it was developed and how fundraisers can use it to implement a more varied ask strategy that will maximise their fundraising outcomes.

The old way of asking

All fundraising solicitations involve an ‘ask’ and most charities use a ladderred ask strategy in their appeals – providing donors with 3 gift options.

The first ask is often known as the anchor (sometimes known as Ask 1). The second and third asks (ask2 and ask3) are typically a multiple of the first or anchor ask. For example $20, $30, $40.

While there is no standardised ask strategy, charities will commonly multiply their anchor ask by:

Without a doubt, the anchor ask is the most important ask as it dictates the subsequent giving options, yet most charities also don’t know what the best anchor is. Some use the last gift amount, some use the average, some use the maximum while others multiply these amounts to slightly increase or decrease the ancho ask. And some charities use different strategies at different times of year, depending on their fundraising goals.

What is clear though is that nobody knows what strategy works best for maximising response rates and increasing the average gift size. And that’s where our new Ask Amount propensity model can help!

Some early insights from our research into asking

Working closely with a core group of Dataro customers, we analysed their previous campaign data and discovered a few truths about their ask strategies:

Fundraisers also told us that developing their ask amounts for appeals was a particularly time consuming, detailed and complex process that could take between half to a full day of work. Even then, fundraising teams weren’t confident in the outcomes.

Improving the art of asking – save time and raise more

The goal in developing our new Recommended Ask feature was to provide fundraisers with a reliable and easy to use ask amount that they could confidently use for all their solicitations in order to get the best result from each individual donor.

So, what is it exactly?

The new Recommended Ask feature is available for free with any Dataro Predict module subscription.

This new type of propensity model provides a recommended single gift amount (in local currency) that is personalised to each donor. Essentially the model replicates some of the best performing ask strategies to provide a single recommended anchor ask for every donor in your database – taking a balanced approach of when to ask for higher or lower amounts, given specific donor variables.

The feature works best with our Dataro Predict Appeals module to help you master the art of the fundraising ask for single gifts in appeal solicitations.

How does it work?

The recommended single gift ask amount is placed into the charity’s CRM like our other propensity models and is updated at the same frequency (typically weekly).

The result is that every donor in a charity’s CRM has a single gift ask recommendation against their individual record, including mid and major donors.

Because the ask recommendations are provided for each donor and updated weekly, fundraisers always know the ‘right ask’ for each donor at any given time (without having to use complex spreadsheet calculations).

Asking for the ‘right’ single gift from each donor, fundraisers can expect to increase response rates, increase your average gift and raise more money for your cause.

Fundraisers will also save time and frustration in preparing their direct mail, email or calling campaign lists and ask amounts – because the work is automatically done for you by our machine learning model.

How to ask right with Dataro’s new ask propensity

The recommended ask amount is single-giving specific and applies to any channel (mail, email, phone, other). While the recommendations are focused on appeals (including newsletters and emergency appeals), they can be used for any type of solicitation such as a phone call to a mid-value donor.

Just like Dataro’s other propensities, the ask amounts are updated weekly and will change as the donor performs relevant actions (e.g. gives a gift). That means the Recommended Ask amount is always up to date, based on the most recent data available and taking into consideration all previous ask behaviour.

But because the ask is not channel specific it can be applied across appeals, calling campaigns or used in digital fundraising campaigns with PURLs (personalised URLS). Using the Recommended Ask as their anchor ask in appeals, fundraisers can then apply their standard ask multiplier to calculate Ask 2 and Ask 3, depending on their objectives. 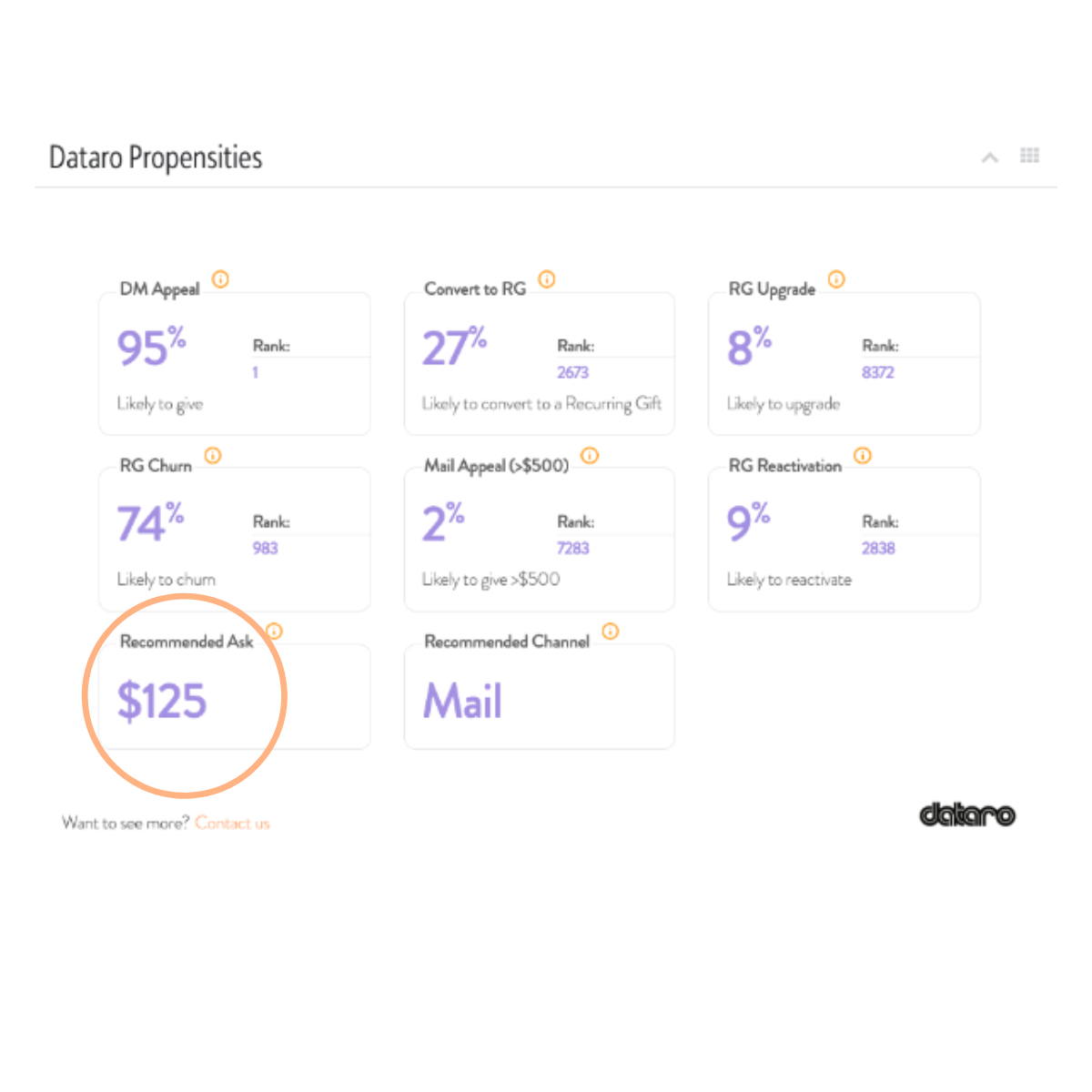 How does the model generate ask amounts?

Our Ask Amount model replicates some of the best performing strategies seen across the Dataro data pool and takes a balanced approach of when to push for higher or lower ask amounts, given a number of factors specific to that individual.

Some of the background factors used in the model include:

Essentially the model applies a set of rules, based on these factors to find an optimal between a donors’ average gift and their maximum gift. In general, the model is more conservative when a donor has made fewer donations or isn’t currently engaged in giving and more ambitious when there is a solid history of prior donations.

In developing the model we analysed the ask data from a core group of Dataro customers to see which strategies were performing best under different circumstances (eg which strategies generated the best returns from donors). In short – we analysed hundreds of strategies, thousands of fundraising campaigns and millions of donations to build a model that we believe provides reliable recommendations.

Why is personalised asking better?

Personalisation in fundraising has never been more important, especially with the rise of digital fundraising. And the use case for personalised asking is clear.

Using Dataro’s Recommended Asks fundraisers are able to determine the most effective ask for delivering the best fundraising outcome for each individual donor. Because we treat every donor as an individual, the recommendations are more suited for them specifically (as opposed to segmentation or rule-based approaches) and are more likely to elicit a better response.

Ready to use a personalised ask strategy for better outcomes?

Are you ready to get started with a more effective ask strategy that is personalised to individual donors? Our Dataro Ask Amount propensity is a free feature with any Dataro Predict module subscription.

Book a 15 minute demo with our team to learn how data-driven fundraising technology like Dataro can help you improve your fundraising campaign targeting and increase the lifetime value of every donor in your database.

Not ready to chat? You can sign up for a FREE Dataro demo account to see for yourself how our predictive analytics software works.

Can Artificial Intelligence Solve the Gaps in Peer-To-Peer Fundraising?

The Impact of Consumer Confidence on Recurring Giving Churn