With fundraising costs on the rise and donors continuing to be impacted by inflation, it has never been more important for nonprofits to have a strong major donor base. That’s because major donors typically continue giving during times of uncertainty, especially if engaged effectively, and the return on investment from major gifts is typically very high.

Although major donors are an excellent source of funding for nonprofits, the process of finding and nurturing major donor prospects can be difficult, time-consuming and expensive. Major gifts rely on strong relationships which take time to build, so results from efforts to expand a major gifts program can be slow.

Regardless of the challenges, most nonprofits are convinced of the importance of major giving and see it as a critical part of their sustainable fundraising strategy. So in this article, we map out a very simple blueprint for launching or expanding your major giving program using AI to help with your prospect research.

Of course, there is so much more to major giving acquisition and stewardship, but we hope this article gives you some new ideas for growing one of the most valuable programs in your fundraising mix.

What is a major gift / who qualifies as a major donor?

In this article by ‘major gift’ or ‘major donor’ we mean a donor who gives more than $5,000 in cumulative gifts over a 12 month period. This could be made up of multiple smaller gifts or one large gift. Of course, different organisations use different definitions and thresholds to define their major gifts. But this is the closest to a consensus that we’ve found!

Why is major giving important, especially during uncertain times?

Insights from Dataro’s own Fundraising Intelligence data pool confirmed that major donors provided a lifeline to nonprofits during COVID. This was especially true for those nonprofits who effectively nurtured their major donor relationships and engaged them in the way the organisation and its beneficiaries were impacted by the crisis.

The return on investment from major gifts is also typically very high, with a median return on investment multiple of aprox 8.6 times cost according to a recent Australian Major Gifts Benchmarking Study. In addition, nonprofits typically see a good retention rate of major donors because these donors are generally deeply connected to the causes they support.

When it comes to major donors, both the process of acquisition and stewarding is equally important but also time consuming. The most common problem we hear from charities and nonprofits is they have limited capacity or not enough data or technical skills to find major donor prospects already existing in their database. So oftentimes philanthropy teams will only focus their stewardship efforts on the people who have previously given larger gifts.

Some larger nonprofits with more financial resources invest in wealth scans or gift searches in an attempt to identify who of their existing donors have a higher capacity to give. This process can be expensive depending on the size of your database and doesn’t tell you which donors to steward first in order to get the best results.

With Dataro’s Stewardship Propensity Model, machine learning is used to analyse your nonprofits donor database, providing predictions of how likely each active cash donor is to give a major gift. With this tool you can regularly scan your database and fill your major giving pipeline. With a prioritised list of donors already supporting your organisation, philanthropy teams can then focus their time and effort in the areas that yield the best financial results – building better relationships with donors!

How to build or expand your major donor program

The first step is to get an understanding of how many major donors are currently giving to your cause. Even if you haven’t officially launched a major donor program, you will find that some donors are already giving major gifts anyway (our standard definition of a major donor is someone giving over $5,000 in 12 months, but your threshold could be set higher at +$10,000).

The quickest way to see how many major gifts you have secured is by using a tool like Dataro’s Fundraising Intelligence.

Title – How many major gifts do you receive each year? How does that compare to other similar organisations? 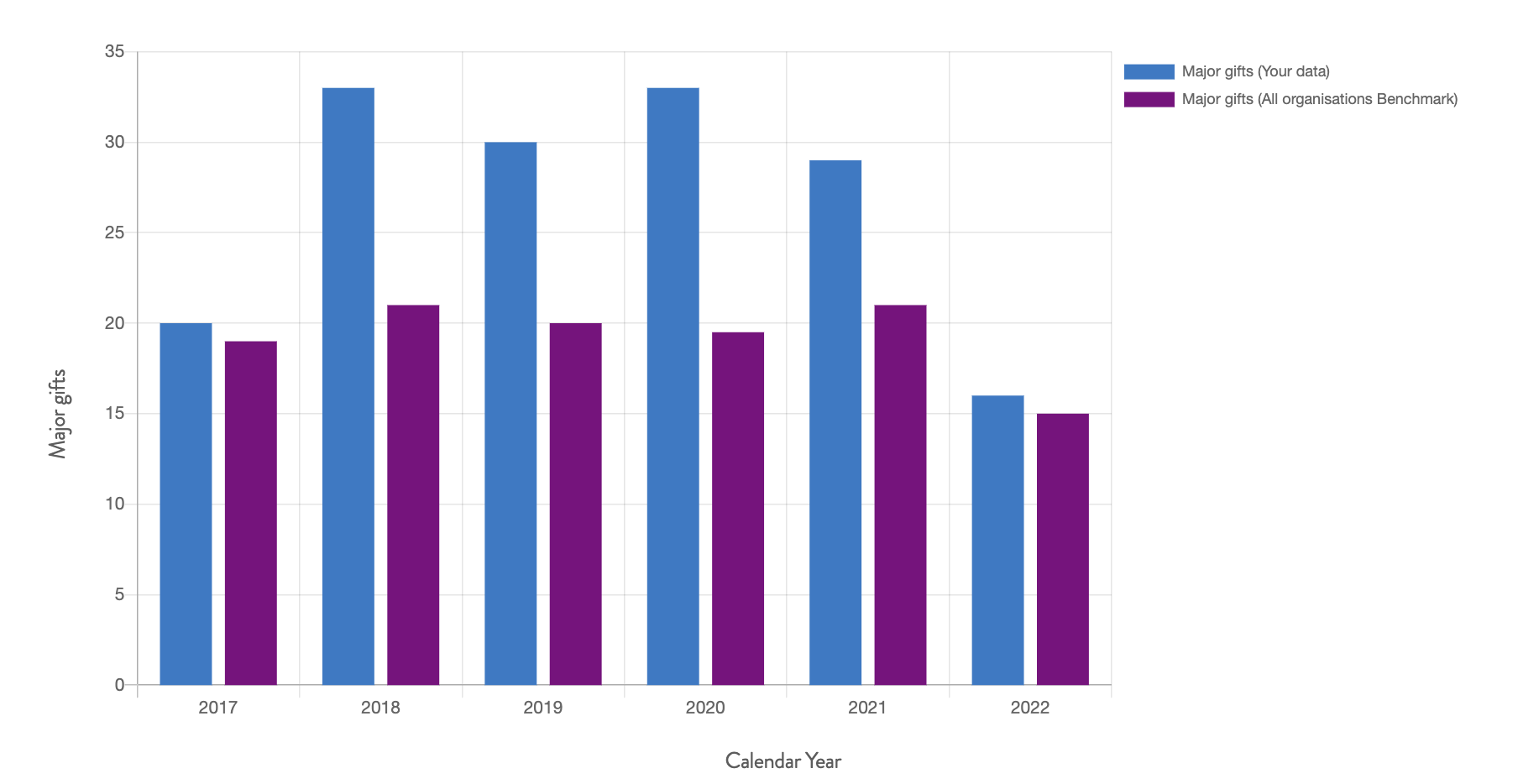 Donors giving major gifts should be identified in your CRM as a Major Donor (using a constituent code or tag) so you can quarantine these donors from your everyday fundraising activities and communications and develop an individual stewardship and engagement plan to maintain their giving.

Step 2. Understand what motivates your donors to give

Having identified your major donors it is critical to understand them better – who are they, how long have they been giving to your cause, what types of activities are they giving to, what are their core interests in your work?

Understanding why your donors give to your cause is key to planning your acquisition and stewardship activities. You can ask your major donors for feedback via a personal phone call or by sending them a survey. Asking your donors for their input will help build rapport and a genuine connection but also demonstrates you value their support and feedback. The donor responses you receive will help inform your major donor content strategy which you can use to acquire and steward your donors.

Some questions to ask could be:

– Why do you give to our cause over another cause you may care about?
– What do you tell others about why you support our cause?
– Was there a specific reason or campaign that made you want to support our cause?
– Was there something in particular that made you want to give a larger gift?
– What is important for you to know about the causes you support financially?

Understanding what motivates your major donors to support your cause is key to developing an effective major donor acquisition strategy and tactics.

Through discussions with many successful philanthropy teams we’ve summarised a few simple yet effective tactics you can use to create an effective major donor acquisition and stewardship plan:

– Tailor and personalise appeal mail packs (with special ad-ons or information)
– Develop personalised email journeys with exclusive opportunities or more information
– Create special events and opportunities including:
* Major donor gala nights or fundraising events
* Boardroom lunches and coffee chats with your CEO/key personnel
* Exclusive ‘behind the curtain’ tours of your operational facilities
* Sponsorship opportunities to provide matched giving for fundraising activities
* Annual report briefings
– Personal thank you calls for every gift over a certain threshold (say $500)
– Thank you calls from the CEO for gifts over a certain threshold ($5k or more)
– Impact reports to demonstrate the ROI of a major donors’ gift

In developing your stewardship plan, be sure to listen to your major donors and customise a plan that meets their needs and interests. This will give you the best chance of building a strong relationship and bringing your donors closer to your cause.

There is so much more to learn about the best acquisition and stewardship strategies and how to cultivate individual relationships, but we hope these have helped sparked some new ideas for growing your major giving program.

One of the biggest concerns we hear from nonprofits is where to find major donors. The most obvious place to start is with the people who already give to your cause. Your donor database is a tremendous source of potential prospects for your major donor program but most organisations have limited capacity to find these donors.

That’s where machine learning comes to the rescue!

Our Dataro Predict AI software uses deep machine learning to find patterns in your data and rank your existing donors in order from the most likely to be a major donor down to the least likely. These ranks are loaded directly into your CRM and updated every week, so you can quickly build a list of the top 100 – 300+ major donor prospects – and that list will always be current with live donor data! The list size depends on your capacity to research donors and steward them effectively.

TIP: Using the Dataro Major Giver Rank select the donors with a rank equal to or less than your desired pipeline list size. This query will select the top major giver prospects. How many major donor prospects are in your pipeline right now? Use this number to select your query size. 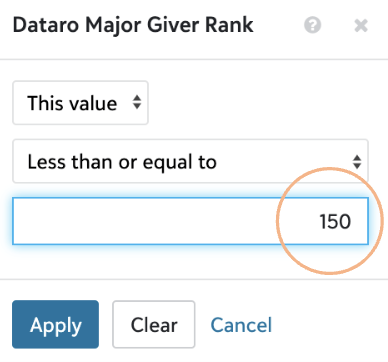 TIP: Using the Dataro Major Giver Rank select the donors with a rank equal to your existing pipeline. Then run a comparison of the two lists – your pipeline and Dataro’s selections to understand the overlap.

By doing so you will identify:
1. The prospects Dataro found that you already knew about
– these prospects can now be considered as having “confirmed” capacity to be a major donor. So it is a good idea to keep building these relationships.

2. Additional or new Major Donor prospects that Dataro found in your database
– these highly ranked prospects should be researched further to confirm capacity and interest. If they weren’t on your radar already, you can start planing and executing a tailored stewardship journey.

Repeat this process as often as you like, but we recommend at least quarterly. This way you will constantly be identifying new prospects to top up your major donor pipeline and means you won’t be missing potential high value donors.

Some nonprofits prefer to use Dataro’s predictions to identify the most likely major donor prospects and then give this to wealth scanning agencies to confirm the individuals have capacity.

Step 5. Remove the donors you don’t want to steward

There are certain exclusions you should apply when refining your major donor prospect list. For instance, you may like to remove doors that are active potential legacy givers or those who don’t want to be contacted. This step is very important and easy to do – just think about which types of potential major donors should not be included in your stewardship pipeline.

TIP: If exclusions reduce your campaign size too far, simply ‘top up’ the list by increasing the size of your major donor rank query. 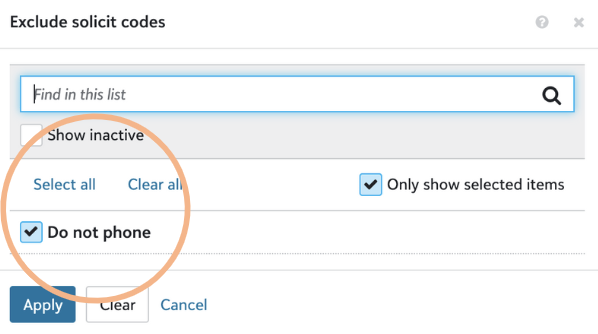 Ready to use data-driven fundraising tactics to grow your major donor program?

Are you ready to get started with or expand your Major Donor Program? Our Dataro Predict Stewardship module is the fastest and most cost-effective way to find new potential major donors in your existing database.  And with Dataro’s Fundraising Intelligence you can track results and watch your program grow.

Book a 15 minute demo with our team to learn how data-driven fundraising technology like Dataro can help you build your major donor pipeline and gain the support of more major donors.

Not ready to chat? You can sign up for a FREE Dataro demo account to see for yourself how our predictive and analytics software works.

Can Artificial Intelligence Solve the Gaps in Peer-To-Peer Fundraising?

The Impact of Consumer Confidence on Recurring Giving Churn