Lort Smith is the largest animal hospital in Australia, with a team of 60 vets and 90 nurses providing vital care to 25,000 animals per year. The iconic institution receives no ongoing government funding, which means it relies on the generosity of the public to continue its mission of providing world-class animal healthcare and wellbeing services.

Dataro this year teamed up with Lort Smith to investigate whether it could improve returns from direct mail appeals using machine learning technology. In particular, Lort Smith wanted to test whether machine learning could be used to identify potential donors from within its database that would not normally be included in its Spring appeal.

To answer this question, Dataro trained a series of machine learning algorithms to generate a prediction of how likely each supporter was to give a gift in the Spring appeal. Using these predictions and campaign cost inputs, Dataro calculated an ‘optimal’ recommended campaign size for the Spring appeal. We then compared our recommended list with Lort Smith’s proposed campaign list, identifying ‘new’ donors selected by Dataro (green) and any supporters that machine learning suggested should be removed from the appeal (red).

The results highlighted the power of machine learning to identify more nuanced patterns of behaviour than classic segmentation approaches.  For example, machine learning modelling identified roughly 4000 people with a probability of giving close to or below 1% that could be removed from the campaign, immediately making a substantial saving. It also identified a sizeable group of about 2000 supporters with a higher likelihood to respond positively to the appeal.

Calibrating propensity scores to closely reflect actual probabilities is a technical challenge, but the results also showed a very close correlation between score and likelihood of giving a gift. This close correlation is shown in the table below. Using this insight, organisations like Lort Smith can reliably generate optimised campaign lists for future direct mail appeals. 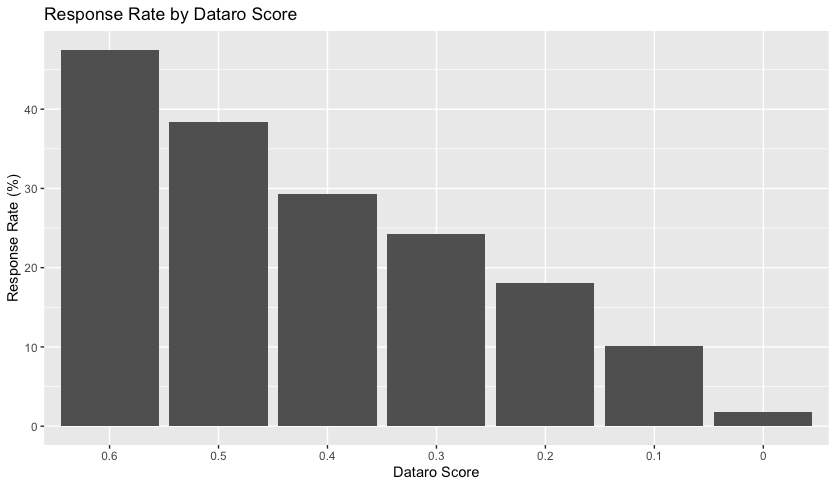 If you would like to learn more, request a demonstration here.

“We recently used Dataro for a DM fundraising appeal. When we analysed the results, Dataro's selections raised us more money and stopped us missing out on important gifts. Our response rate and revenue both were higher than with older RFM technology”

Want to see what Dataro can do for you?