In the challenging fundraising environment of 2021, Save The Children Australia were looking for ways to improve their appeals targeting to increase net revenue.

So they ran a real-world experiment with their Christmas 2021 appeal to see if Dataro’s AI-powered donor predictions would generate more gifts with less waste when compared to their traditional segmentation approach.

The results showed that the Dataro selections reliably generated more gifts than the RFV selections, with an 18% increase in response rate and more revenue received from less mail sent. In their first 6 months using Dataro, Save The Children saved $16k across three appeals through better donor targeting. 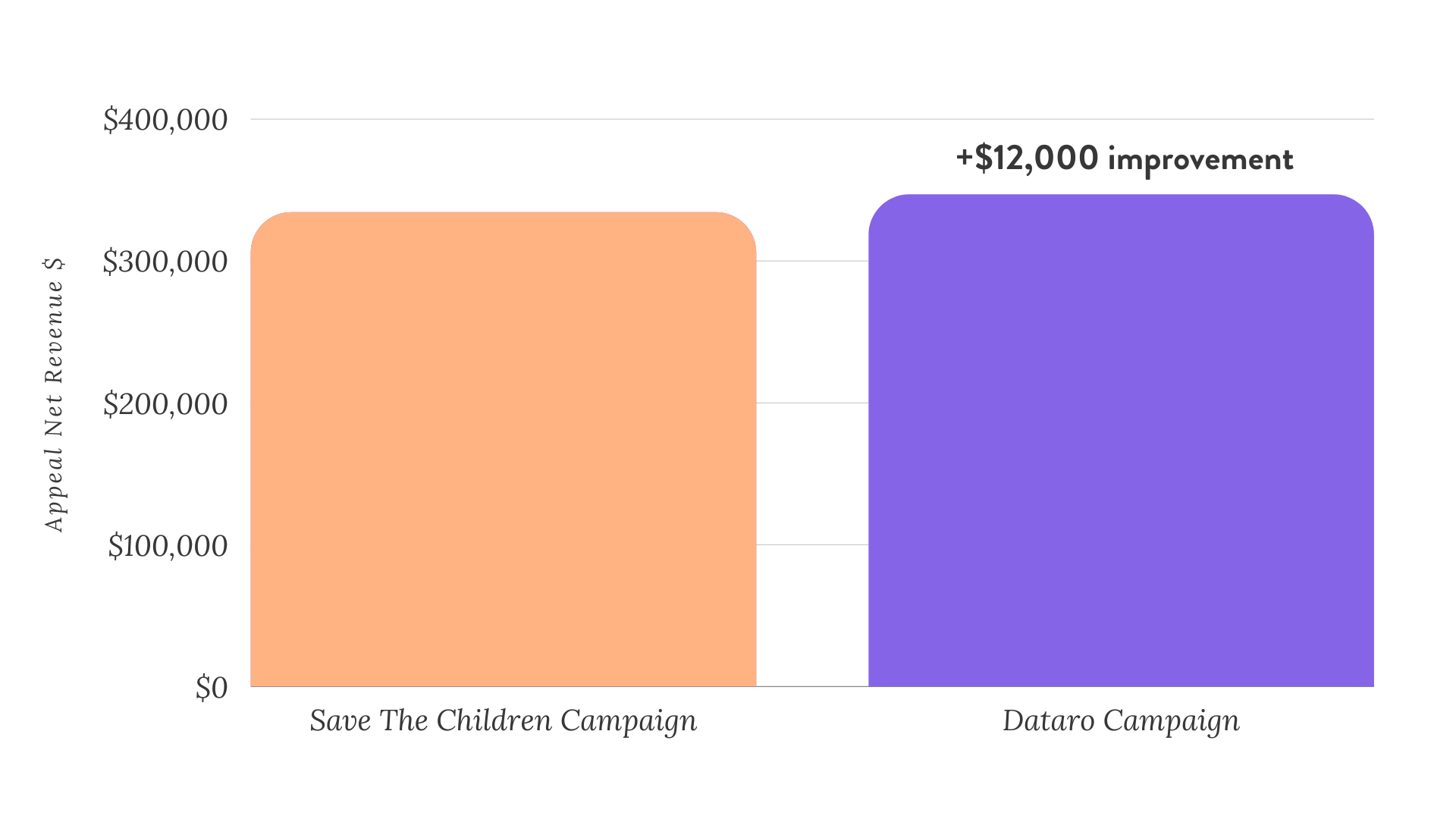 Setting up the test

Save the Children used their traditional RFV segmentation strategy to select donors for the appeal.

Dataro’s direct mail appeal propensity scores and ranks were then integrated with their CRM and used to select a list of donors with the highest likelihood to give.

The two lists were combined so we could identify:

By sending the campaign to all donors selected using either method, we were able to compare the results from the Dataro version of the campaign versus the Save The Children’s version.

Had Save The Children solely used Dataro’s predictive scores to make their appeal selections they could have reduced the mail file by 14.5% and saved +$8,000.

The additional 1,244 donors added by Dataro gave 59 gifts at a reasonable 4.75% response rate, netting roughly $,3000 in extra revenue. In comparison, the extra donors that Dataro recommended removing from the campaign (selected by the charity using RFV), performed very poorly, with a response rate of just 0.5%. This cohort actually cost the charity more to mail than they gave in gifts, costing >$8,000. 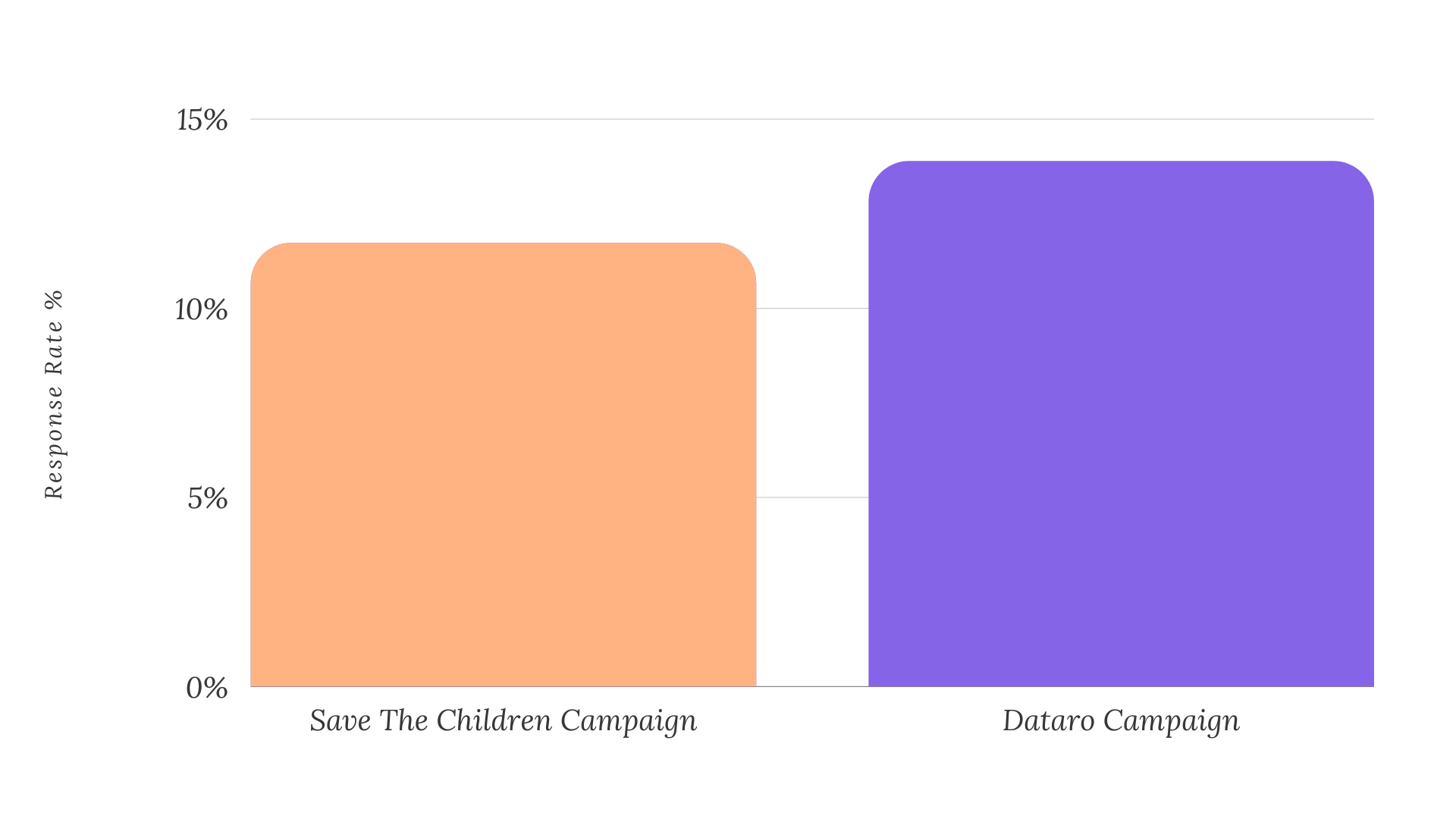 Confident in the Christmas appeal results, Save the Children ran subsequent experiments for their next two appeals using the Dataro donor scores and ranks as the default appeal targeting method to test reliability of the new selection method.

The results of these campaigns built on the strong initial appeal experiments and confirmed that using Dataro’s AI scores and ranks as the sole selection criteria was the best approach.

If you are using a segmentation approach for your direct mail appeals, you are missing out on gifts from donors in your database and wasting costs targeting donors who are highly unlikely to give. The time spent building your data lists, usually with specialist support, can also be lengthy and often starts months in advance of the appeal going live.

Nonprofits using Dataro’s machine learning to identify the donors most likely to give to their direct mail appeal are able to target better and as a result:

With prediction-based targeting Dataro will help you raise more from your existing donors, with less waste and saving you time and effort.

“Over the last 6 months we have been working closely with the team at Dataro to support our appeal data selection with some really positive results in a challenging fundraising environment. Starting cautiously, wanting to minimise any potential risk to income, we have quickly gained confidence and tactically increased our reliance on the Dataro ranking of our database. This has helped us to identify a smaller cohort of supporters with a higher propensity to give and a better ROI for our appeals. ” 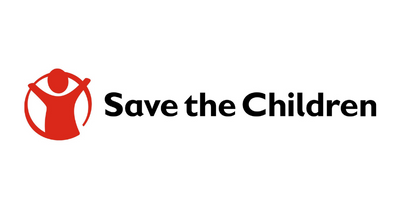