The fundraiser’s guide to RFM segmentation

RFM is the most common method used by non-profits to segment their database and choose which donors should be targeted in a fundraising campaign. While RFM was originally created to focus on retail customers, it has been adopted by the fundraising sector as an easy way to categorise different types of donors.

This guide is specifically designed to help you do RFM segmentation if you work in the non-profit sector and want to increase response rates and average gift sizes in your direct marketing campaigns..

What are Recency, Frequency and Monetary Value?

RFM (or RFV) stands for Recency, Frequency and Monetary Value. They are three basic characteristics of every donor journey. Here’s what they mean:

By combining these three simple values into a single RFM ‘segment’, you can easily break up your database to see which donors are ‘good’ candidates for a particular appeal based on their giving history.

This guide will walk you through how to create your own RFM segmentation. You may use your CRM (e.g. Salesforce, Blackbaud Raiser’s Edge, or Microsoft Dynamics), or simply use Microsoft Excel to create your segments.

The first step is to create the Recency, Frequency and Monetary fields for every donor. The output is a table that contains 1 row for each donor with the following columns: 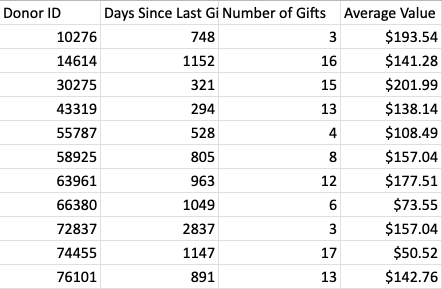 In the next step we simplify this data by converting each of the R, F and M values into one of 5 groups. To simplify things you can also use 3 groups to begin with and you will not need more than 5. To do this convert each RFM value to a number using the guide below:

Remember, each donor should now have three separate scores next to their name (i.e. a score for recency, a score for frequency, and a score for monetary value).

The third step is to select groups of donors who will be targeted in your fundraising campaigns. It is helpful to assign names to segments of interest. Here is an example of what that will look like for charities

Step 4: Choose who to target

The final step is to actually generate a target list for your annual giving appeal or fundraising campaign using your segments above. Remember, you can create as many segments as you like by combining the different RFM values.

The segments you choose to target varies depending on the type of fundraising campaign, the message, and of course your budget. For example, in a typical mail campaign, you might target anybody with an R value of 4 and 5, F value of 4 and 5, and with any Monetary value. However, if you are running a telefundraising campaign, you only want to target those most likely to give a larger gift (for instance, the 5-5-5, “Best Donors” group). Typically, the campaign will show that the higher the RFM scores, the better the response rate and revenue from that segment.

The challenges of RFM

This type of non-profit specific RFM segmentation is a simple and robust method to define which donors to target in your fundraising campaigns. It’s simplicity, however, hides a number of flaws that stand in the way of strong results. For instance:

AI is the new segmentation

The largest limitation of RFM is that it is based on what the donor did in the past, and not what they are likely to do in the future. It’s not a prediction. When planning campaigns, it is much more desirable to know what a donor is likely to do next so you can only include the donors who are actually likely to give to your specific fundraising ask. Crucially, this prediction should be based on everything known about the donor’s journey and not just 3 pieces of data. 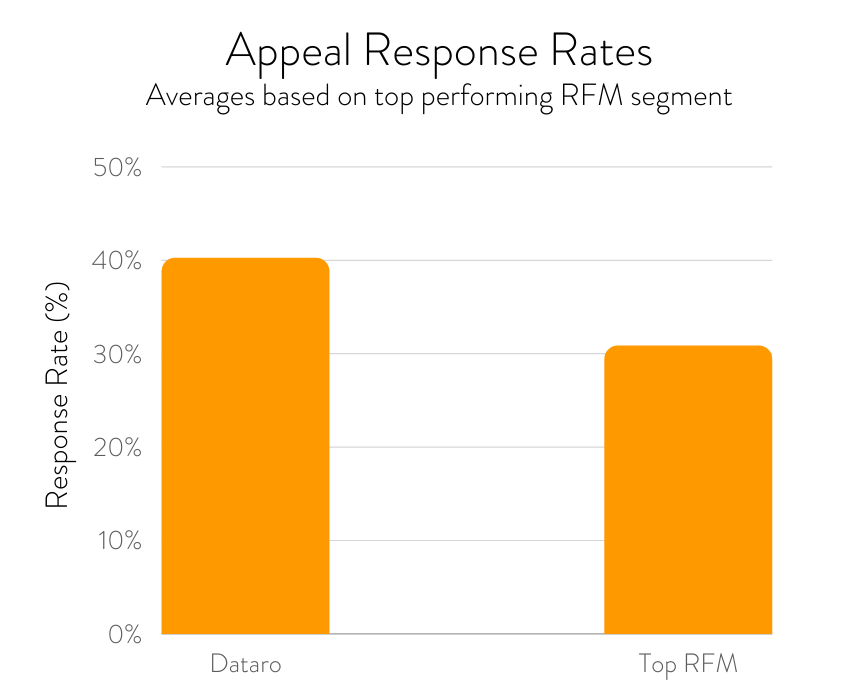 The graph above shows a comparison between the response rates of the best donor segment (5-5-5) and the donors predicted most likely to give in a mail appeal. This is real data taken from 10 real fundraising campaigns. As you can see the predictive method yields a much higher response rate! This is because it is using all known data about the donor, and it is based on what that donors is going to do in the future, not just on what they have done in the past.

In essence, AI allows you to pick the best donors from every possible segment for a particular campaign. This means all the most likely givers get included, regardless of what RFM segment that might have fallen into. The result is a better response rate and higher return.

If you would like to know more about using AI to improve your fundraising selections, watch our introductory video, or sign up for a free demo of Dataro’s software.

Why machine learning is the best segmentation

Three easy ways to get started with AI for fundraising

Who gets a high value pack? Three questions to ask to help maximise returns